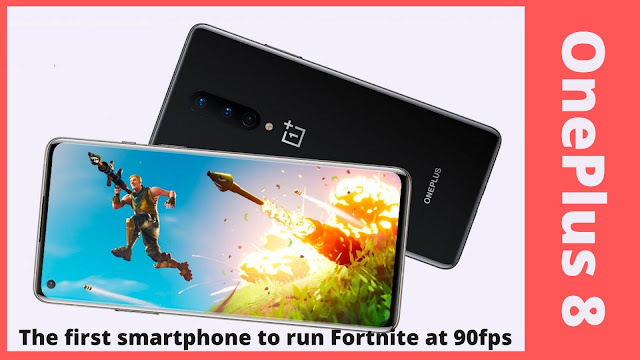 OnePlus 8: The first smartphone to run Fortnite at 90fps: While smartphones with higher refresh rates have existed for a while now, its adoption and optimization for gaming have still been a bit uneven. But now, OnePlus 8 has fully utilized its faster display as the smartphone is the first to run Fortnite at 90fps.
Fortnite is one of the world’s most popular video games at the moment. It is a different and rather cartoonish take on the extremely successful battle royale genre and competes with the likes of PUBG.

With games being intensive multiplayer battles, higher refresh rates can give users a slight edge in their fights. For those unaware, a higher refresh rate also translates to lowered input lag, meaning your physical actions are reflected faster on the screen.

The difference is in mere milliseconds, but in a first-person shooter title, that’s all that matters.
Unfortunately, despite the OnePlus 8 packing Qualcomm’s flagship Snapdragon 865 SoC alongside the Adreno 650 GPU, the game can only run at 90fps when the graphics settings are set to “low.”

While you do lose visual fidelity, the improved performance really does make up for that loss in detail. So, if you’re into Fortnite and mobile gaming, the smartphone, and the game title really pair well together.