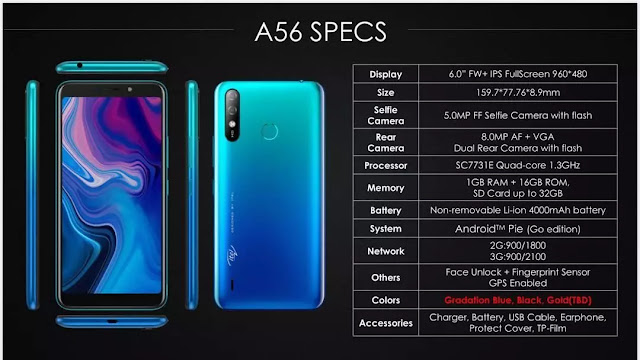 The iTel A56 is another device from iTel mobile. This is a low-end device which its selling point would be claimed at the 6.0-inch display and the 4000mAh battery which is the same battery capacity we have on some previous device from iTel.

The itel A56 is a cool dual-sim smartphone produced by itel Mobile. The itel A56’s 6.0-inch screen is great for movies.

It runs on Android 9.0 Go Edition with Spreadtrum chipset. This is one of the cheapest smartphones with a 6.0-inch display we have around now.

The itel A56 /A56 PRO is a cool dual-sim smartphone produced by itel Mobile. The itel A56’s 6.0-inch screen is great for movies.

C. AVAILABILITY, PRICE AND WHERE TO BUY THE ITEL A56

The itel A56 is currently available in both online and offline stores. Price ranges per country/ Region are as follows: