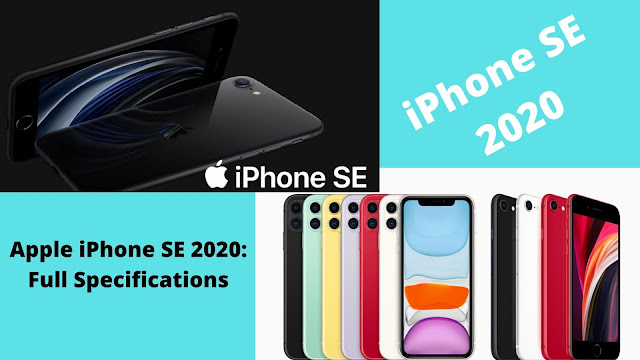 Apple iPhone SE 2020: Full Specifications, Reviews, and  Prices. Four years after the first iPhone SE, Apple returns in 2020 with the second generation of its model appearing as the cheapest iPhone in its range. If the first version of the product released in 2016 took the chassis of the iPhone 5s, that of 2020 is very similar to the previous iPhone 8.

According to sources internal to the brand, Apple would like to sell between 20 and 25 million of its new product, in waiting for the release of its next iPhone 12. Released in the midst of a coronavirus epidemic, the new iPhone SE will only be available for purchase on the internet. Pre-orders are available from April 17, for delivery start on April 24.

Available from € 489, the new iPhone SE is now the cheapest smartphone in the Apple line. It is much cheaper than the iPhone 8 it replaces, but inevitably, its design takes on the legacy of the old model, with its button centered on the bottom of the device. On this page, we will look at all the features of the iPhone SE 2020.

You will know more about the prices, the differences with the previous iPhone SE and iPhone 8, about the presence of an A13 chip and WiFi 6, as well as on smartphone cameras. Without further ado, here is our iPhone SE 2020 review.

The new iPhone SE 2020 is a replacement for the iPhone 8, but also a legacy. On the design side, the observation is all the more true, but it was the price to pay for Apple to offer a more accessible front door in the iOS universe.

Let’s start our iPhone SE 2020 review with the screen. With its diagonal of 4.7 inches, it is one of its biggest points in common with the iPhone 8. Obviously, for the price of the smartphone, it does not have OLED technology. The latter rather uses a Retina LCD screen with a resolution of 750 x 1334 pixels.

The screen does not edge to edge and it is on this point that Apple marks a differentiation between its range of iPhone 11 and this iPhone SE. On the lower part, a touch button, identical to the iPhone 8 is available and allows you to find the usual commands such as returning to the home menu.

On the upper part, Apple has not integrated sensors for Face ID, which is why users will use the bottom button for digital recognition (called Touch ID at Apple). The only difference is that instead of finding 3D Touch as before, Apple has developed its technology to a new protocol called Haptic Touch.

It has an aluminum assembly, and its face rear is glass. On the sides, users will be able to find the classic physical buttons of the iPhone, with an ignition button placed on the top of the right edge, and volume and switch keys between ringing mode and silent/vibrator on the left side.

Apple launched its product by revealing the three different colors that will be launched initially by the brand. The iPhone SE 2020 is available in black, white, and red with the (Product) RED product series, which will donate a portion of the profit from each sale to the Global Fund and its fight against the current pandemic. Note that on this red version, the lower and upper borders of the screen are black. The white version is completely white.


Technical characteristics of the iPhone SE 2020

Here we are at the technical part of this iPhone SE 2020 review card. Although the device is not necessarily intended for customers looking for a terminal with the best technologies, our iPhone SE review will have to look at it as much of most of the new features from the device can be found here.

Indeed, for its lower price than other products of the brand, the heritage is far from being light. The new iPhone SE 2020 risks putting a blow to many mid-range Android devices, with which it will compete.


Almost as powerful as an iPhone 11?

The first novelty concerns the processor part. Apple has decided to integrate its latest A13 chip, engraved in 7 nm, which was presented at the time of the launch of the new iPhone 11 and iPhone 11 Pro.

It is the most powerful processor at Apple, and it is integrated into the new iPhone SE 2020. Thus, the device should be excellent on the performance part, while the Cupertino company can enjoy marketing smartphones with functioning components perfectly together.

Some specialists question whether the chip will not be bridled, because the smartphone is thinner than conventional high-end devices from the Apple range. Even if that were to be the case, the smartphone would in no way derogate from the fact that it will be largely powerful enough for the use that customers will have of it.

Faced with the iPhone 8, which works for its part with the A11 chip, the new iPhone SE 2020, therefore, more power. Its cheapest version offers an internal storage volume of 64 GB, far from the only 16 GB that the first iPhone SE offered in 2016. Apple also announced on its website that the device is available in 128 and 256 GB of internal memory.


No 5G, but faster WiFi connectivity

Inevitably, Apple could not start integrating 5G on a smartphone that wanted to be cheaper. Especially since the Cupertino company does not yet offer a 5G device in its range, which should be the fruit of the innovations of the next iPhone 12.

Furthermore, we note in our opinion iPhone SE 2020 that Apple has taken takes into account improvement in the device’s connectivity by making it WiFi 6 compatible. Even today, all premium smartphones are not yet equipped with this technology – up to 2.7 times faster than WiFi 5.

Another thing, Apple has recovered the possibility of integrating two SIM cards in its new iPhone SE 2020, as it was the case on the new iPhone 11. Users will be able to use only one nano-SIM card, but it will be possible to add an additional eSIM card.

As usual, Apple does not offer specific data on its battery. We can only know the power of its accumulator during the first tests of the smartphone. However, the brand said the iPhone SE 2020 could last up to 13 hours in video playback.

This corresponds to the data that we had with the iPhone 8. It could be that the two smartphones are still similar at this point.

The latter will also be delivered with a 5 W wired charger, which does not change either. However, the smartphone is compatible with 18 W fast charging.

A novelty should be noted, however: Apple offers an additional battery reserve on its iPhone SE 2020 which allows you to operate the device’s NFC chip when necessary. For example, if your smartphone runs out of battery, you can still continue to pay with Apple Pay for purchases such as public transportation.

On the photo part, the iPhone SE 2020 takes over the Portrait mode, which was not available on the iPhone 8. Users should appreciate this equipment although the back photo lens is the same Sony 12 MP sensor. proposed on the previous model.

As we know, to be able to function properly and not depend only on software processing, this portrait mode which blurs the background needs a depth sensor. On this iPhone SE, the equipment will not be available. See you in our next tests to find out if this Portrait mode is not less interesting.

On the video part, the 12 MP sensor with its 28 mm focal length opening to f / 1.8 offers a 4K resolution. On the front, the selfie sensor has the same 7 MP lens of the iPhone 8.

We’ve already told you, as this is the information that will interest most people here: the price of the iPhone SE 2020 is 489 euros. At this price, the smartphone is offered with a 64 GB configuration. For the more powerful versions, discover the price list below: